As our journey continued, we discovered that Toto is not just the name of Dorothy’s dog from the Wizard of Oz, or a group of well-known studio musicians in Los Angeles who came together to create killer grooves like this. It is also a Japanese company that manufactures high end bathroom/shower accoutrements and fixtures, with gross sales in the billions of dollars. I’m not kidding about high end. I had a Toto toilet in one of my hotel rooms that had so many buttons I thought I was in Captain Kirk’s chair on the bridge of the Enterprise. Does that button mean “flush” or “warp speed”? Perhaps both? 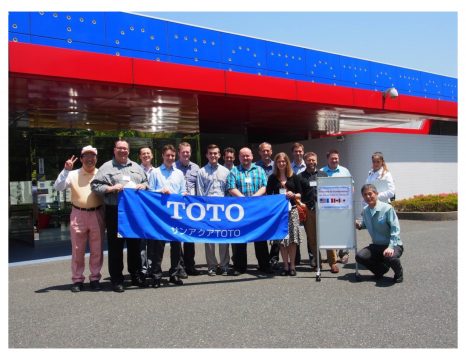 We went to two Toto factories. The first one was especially amazing, because every single one of the operators had a disability of some kind. Some were deaf, some were in wheelchairs, it ran the gamut. But they were allowed to tailor their workstations for maximum efficiency. Like the other lean companies we visited, Toto takes the business of joy seriously. Excellent visual controls. 5S cleaning and organization that covers every area of the facility. And small things that make work fun. For example, how many times have you lost a tool at home or at work? Well, Toto has shadow boards so that you can easily identify when a tool is taken. But then they take it one step further by affixing – via Velcro – the picture of the person who has the tool in its place on the shadow board. No more guessing! You now know that Hiroshi took your tool again and can go ask for it back nicely! All their machines and work stations are on wheels or high bases for easy cleaning. There is even a garden outside that is tended by employees and is easily accessible by any of the operators who are in wheelchairs. We really enjoyed getting to know these wonderful people. Work can be fun, joyful, serious, and profitable!

Until next time, we leave you with a serious question from our own Noah Frank that was answered hilariously by the Toto team. Here’s to good-looking team members! 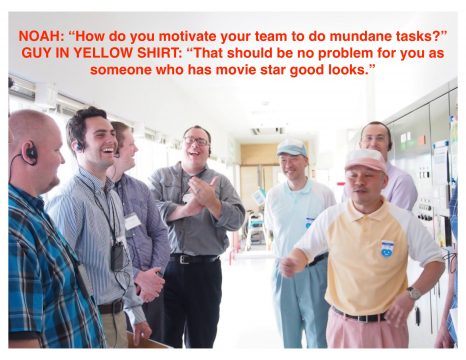